The Report on UK Jobs is unique in providing the most comprehensive guide to the UK Jobs market, drawing on original survey data provided by recruitment consultancies and employers to provide the first indication each month of labour market trends.

The main findings for June are:

Recruitment consultancies signalled a softer decline in hiring activity at the end of the second quarter. Permanent staff placements and temporary billings both fell at notably weaker rates than in April and May when the coronavirus (COVID-19) pandemic was at its most severe. That said, rates of contraction remained sharp amid reports that clients continued to either pause or cancel recruitment plans. 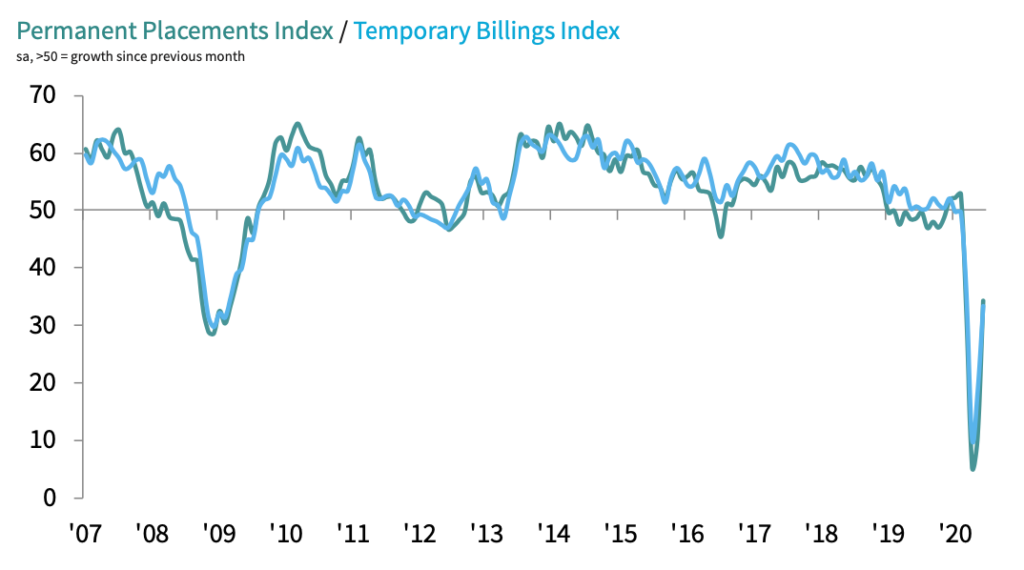 The availability of workers rose at the quickest rate since January 2009 in June. There were widespread reports of staff supply increasing due to redundancies and workers who were on furlough and seeking new roles. Substantial increases were signalled for both permanent and temporary staff numbers, with the latter rising at the quickest rate in the survey’s 23-year history.

Starting pay for both permanent and short-term staff fell further in June as demand for workers remained weak and labour supply continued to increase. Though not as severe as in May, rates of reduction remained sharp for both starting salaries and temp wages.

Demand for staff remained historically weak during June, despite the decline in overall vacancies easing further from April’s record pace. While permanent staff vacancies continued to contract at a faster pace than seen for temporary roles, rates of decline were substantial in both cases.

“Despite an inevitable further drop in hiring activity for permanent and temporary staff, it is encouraging to see they both fell at softer rates than seen in April and May. However, the air of uncertainty around the COVID-19 pandemic will linger – and rebuilding confidence in the UK jobs market will take time. All eyes will be on the Chancellor’s fiscal statement today, with job seekers hoping to see a focus on skills and retraining. While UK business will welcome further support packages so they can start to ramp up as lockdown eases, and recovery gets underway.”

“While there are signs that the worst declines are behind us, today’s figures show that it will be a while yet before we see job placements growing month on month. That’s no surprise, as businesses are focusing on bringing furloughed staff back to work, or making redundancies where they cannot be avoided. Recruiters will be key to helping those who lose their roles find new work – there are always vacancies out there for jobseekers, though they are at a lower level than normal right now. This is now a jobs crisis. Rishi Sunak should use today’s Summer Statement to boost job creation, with a cut in National Insurance designed to retain jobs and boost hiring. Action on skills will also be vital to getting people into growing sectors – including a more flexible approach to levy-funded training.”

Posted in:
Tagged with: