I’ve been reminiscing, thinking back to the earlier part of my career as a Technical Sales Specialist for Atomic Spectroscopy. Back in the early 90’s I’d originally joined Phillips Analytical as part of the UK Sales team and by the time US based Analytical Technologies Inc. (ATI) had acquired the business, I was working in a more international role and much closer to Product Development. The business had also been rebranded as ATI Unicam, a nod to the original foundations of the company as Unicam Instruments established in 1934.

I was setting up for a demo where a customer wanted to see some results using Graphite Furness AA. Yet again, I found myself leaning and stretching over the instrument with a dental mirror to peer into the graphite tube in order to perfectly align the sample introduction process. It was a pain!

My ‘Eureka’ moment came and I rushed into the Product Development team, grabbed the first person I could find and said, “Why don’t we put a video camera in the instrument?” A video camera displaying a live image from inside the graphite tube seemed like a great idea, at least to me!

The idea was well received and work began very quickly on a prototype. In my excitement I soon came up with a catchy name for this new development and even a logo. And so it was that Graphite Furness Television (GFTV) was born. We launched in 1994 with the biggest fanfare we could afford. The budget even stretched to fancy coasters for our customers and lapel pin badges for our sales team that were first worn at Pittcon that year! The coaster pictured sits on my desk as I type. 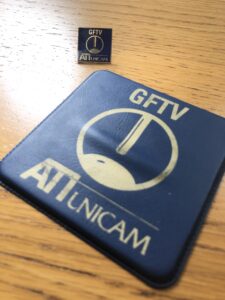 The advertising when I look back appears so dated now. The user interface in particular looks antiquated particularly in terms of what’s possible today with computer graphics. Things change so quickly and no doubt if such a technique were introduced today a completely different approach would be taken with much greater emphasis on social media and of course, video. YouTube hadn’t been invented back then and if you look at the ad carefully, you won’t even find an email address! 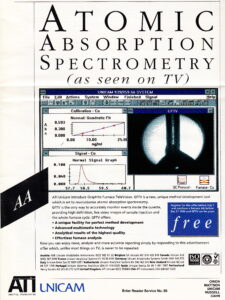 We were the first to market with this accessory and the interest it created was quite remarkable at the time (no doubt assisted by the free introductory offer!) I do look back on this with a sense of nostalgic pride and note that Thermo, who later acquired ATI Unicam, still offer it today and still brand it as GFTV. It seems other AA manufacturers have also added this functionality, but we were the first !!

What memories do you have of AAS?

This site uses Akismet to reduce spam. Learn how your comment data is processed.